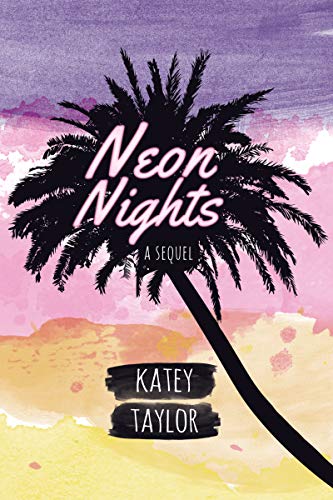 ‘Neon Nights’ by Katey Taylor is an addictive sequel to ‘Inebriated’. Cait has moved to San Diego to live with her mom after her parents’ divorce, and she is doing her best to move on from the harrowing events that closed out her junior year. Haunted by the memory of her friend Steph, she tries to develop a life outside of everything she’s ever known. She begins the year at an alternative high school where she meets Pete. Their friendship quickly develops, and they begin partying together.

Cait’s motivation throughout the story is not really defined too much. Readers don’t quite know what she wants to do with her life after high school ends. However, it is very clear that there are pressures in her life that are causing her to act out, from her parents’ divorce to her mother dating again, to the horrible memories that she can’t help but relive every time she gets behind the wheel. Right or wrong, this is the way she handles things, by drinking and trying drugs, despite having been down on the drugs throughout her previous adventures in ‘Inebriated’.

A couple of guys, both off-limits and seemingly nice, come into the picture as the story goes on, but Cait always finds herself drawn back to Adrien Cross, the lead singer of a band that she loves. Their relationship has ended, yet his online followers still weigh on her life, since she can’t help but read what they have to say about her. When Adrien releases a single that she knows she inspired, she finds herself falling deep into an abyss of overwhelming uncertainty about what her future holds and how she will ever get over Adrien.

When her eighteenth birthday rolls around, life seems to be playing cruel tricks on her, and the events of the day become too much. However, in a turn of events that is predictable, yet engaging, Adrien is brought back into her life when she phones him for help.

Cait and Adrien’s relationship has all sorts of ups and downs. They are right for each other while at the same time being so very wrong. She is constantly in over her head, between alcohol and pills, let alone the fact that she is only eighteen and is supposedly the driving force behind Adrien’s return to sobriety. That is a lot of pressure to put on one individual, especially one so young. She can’t seem to get a grip on her life, which is only exacerbated when she makes a choice to do something with Adrien that reveals to her what kind of life she’s in for if she continues down the relationship path with him.

Deception, aggravation, and constant worry are only a handful of the issues she knows she will have to come to terms with if she stays with him. When he finally realizes that being an adult is what it takes to show her he truly cares, heartache and upset are the only emotions there are to describe how the book concludes. Yet, their relationship reveals larger truths than they know – sometimes life deals harsh blows, and knowing how to deal with them, how to cope and find strength in what happens, is utterly important. It can make or break you, and you can learn some startling truths that are sad and horrible, and they may come at a high cost, but they are essential to character growth.

You can find ‘Neon Nights’ by Katey Taylor here.