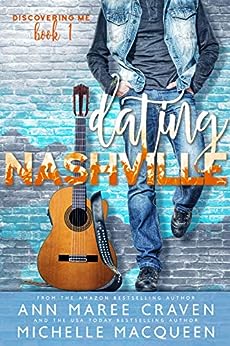 ‘Dating Nashville’ by Michelle MacQueen and Ann Maree Craven follows some of the same characters that graced the pages of Macqueen’s and Craven’s ‘Redefining Me’ series. Beckett (Becks) Anderson and Nicky St. Germaine are the two main characters in this novel about finding one’s own truth and coming at it with a vengeance.

When Becks left town a couple of years before to move to Nashville with his friend Nari and her boyfriend Avery, the three friends felt they made the right call. Becks didn’t look back, aside from talking to his sister, Wylder, from time to time. When he returns for a concert he’s performing and shows up at Nicky’s graduation, he feels he is seeing his best friend Avery’s little brother, who also happens to be his friend, grow up. Little does he know that seeing Nicky will awaken feelings in him that he didn’t know he had.

At first it seems like he’s just trying to protect him, being the big brother type. But everything changes when he jumps off stage at his own concert and kisses Nicky smack on the lips to make Nicky’s ex-boyfriend Kenny jealous. Everything turns upside down, including Becks’ music career. Even though he stresses that he isn’t gay and was just trying to help a friend, his label wants to make a big deal out of the relationship, and he goes along with it, enlisting Nicky to play his fake boyfriend. The problem is that Nicky has had a crush on Becks for years, and despite wanting to stay out of the spotlight, he can’t say no to the invitation, even though he can see what the onslaught of paparazzi are capable of doing to his not-so-exciting life.

As Becks and Nicky grow closer, much like they were years before, Nicky starts to feel standoffish. He doesn’t want the public displays of affection that Becks feels he needs to give to the people who are representing him, let alone his fans. Becks, on the other hand, is worried about the way he feels whenever he kisses Nicky. It is unlike anything he’s ever felt with a woman. It makes him question his sexuality and his understanding of who he is. The now topsy-turvy world that Becks and Nicky are in doesn’t make it easy for them to talk and learn about anything together, so they find themselves growing further apart, not wanting to step on each other’s toes, and not wanting to hurt each other any more. Yet, Becks knows one thing for sure – he needs Nicky now, more than ever. Even if life goes back to the way it was, he can’t stop thinking about his old friend, the person he has become, and the person Becks himself feels like when he thinks of Nicky.

A love story through and through, with definite doses of truth-telling, anger, resentment, uncertainty, and even some Secret Service thrown in for good measure, ‘Dating Nashville’ expands the story of a group of friends from small-town Twin Rivers and reveals how truths, no matter how scary, can sometimes be the best way to move forward and learn who you are, why you matter, and what you can do to make sure that you always stay just that way.

You can find ‘Dating Nashville’ by Michelle MacQueen and Ann Maree Craven here.