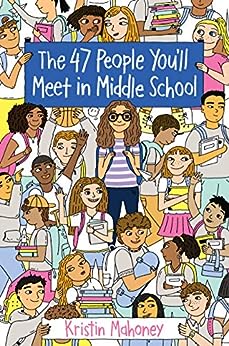 ‘The 47 People You’ll Meet in Middle School’ by Kristin Mahoney is an endearing look at an often hard time in young people’s lives. It is at this time when kids are starting to come into their own, learning about themselves and others and how perceptions can make or break one’s reputation. Main character Gus (short for Augusta) is the narrator of the book as she writes to her sister, Louie, about the various types of people she meets during her first year of middle school. From the assistant principal to the janitor to a group of unlikely friends and some mischief makers, there are lots of people out there who make Gus’ first year of middle school more difficult, but sometimes a bit more fun.

At home, her parents’ divorce weighs on her. She feel that it is affecting her personally, since her desire to get contacts seems to be put off due to the costliness of the divorce. Her attempts to make money are not all well-received, and she has to deal with issues at school as well as at home as a result of these attempts. Meanwhile, she finds solace in some new friends who make her realize that despite her best friend having to go to another middle school, all hope is not lost for her to have a semblance of normalcy. She can still enjoy life in middle school among other people.

Gus learns, through a barrage of trials and tribulations thrown her way, that all hope does not need to be lost even if it seems like life is constantly out to get her. There will always be some sort of trouble in one’s path, but it is the way one deals with it that shows true character. This is one of the lessons she learns in the story, and it is a testament to Kristin Mahoney as the author that she is able to show how one’s character can be both a motivating and debilitating characteristic, depending on which character is being discussed. Obviously we are reading the book from Gus’ perspective, but it is still quite telling and inspirational that someone as young as a sixth grader can both show and tell one’s true colors. A fun and entertaining book that comes highly recommended.

You can find ‘The 47 People You’ll Meet in Middle School’ by Kristin Mahoney here.