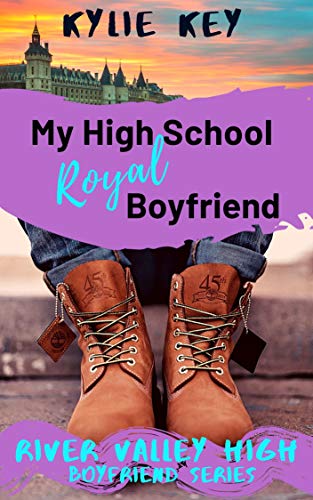 ‘My High School Royal Boyfriend’ by Kylie Key follows new River Valley High students Blaire and Alex, as they try to escape the troubles that plague them by starting anew. While Blaire comes from an extremely wealthy family who owns the town’s well-to-do ice cream shops, she has been accused of something that she knows she didn’t do at her ritzy prep school. Alex, who comes from out of town, has a secret all his own. The son of royalty, a tragedy has taken him into hiding from the press, bringing him to River Valley.

The two new students try to reinvent themselves, and while Blaire has always been pretty and popular, she tries to stifle that image by changing it entirely, which brings about truths that she had never considered. She learns that it’s not as easy when looks and wealth aren’t taken into account, but she finds she likes how her new friends seem to like her for herself. Alex agrees with this feeling, as he enjoys the solace of not being in the spotlight, and getting to know Blaire, as they work together in their acting class on a school play. The activity provides them ample opportunity to get to know more about each other, all while they worry about how they will ever be able to reveal themselves as liars, even though both of their secrets aren’t really all that bad. However, it’s all about perception, and a secret can often seem terribly worse to the person keeping it than those who they are afraid to tell.

Both students discover that changing their names and hiding their pasts will only catch up with them in the long run. Though, despite the predictability of them learning of each other’s pasts, the story is engaging and sweet, showcasing how perception and image aren’t all they are cracked up to be. Just because someone thinks one way doesn’t mean that’s the be all and end all of what the answer truly is, and that is a point that must always be remembered. High school is a hard enough time without all of the judgment thrown into the mix. The story works well, in a nice, relaxed way, to prove that seeing people for who they really are, and giving them a chance, are worth so much.

You can find ‘My High School Royal Boyfriend’ by Kylie Key here.