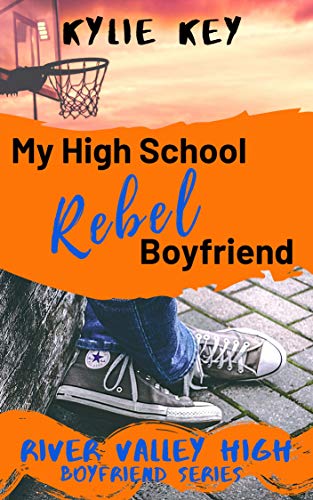 ‘My High School Rebel Boyfriend’ by Kylie Key follows main characters Harper and Mitchell as they have to find a way to work together. While Harper is on the volleyball team, Mitchell is a basketball player. Besides sports, they don’t seem to have much in common, and Mitchell doesn’t try to be friendly when Harper’s around. Harper’s diabetes adds to the issues between them, since Mitchell doesn’t know about it and she has no reason to want to explain it to him due to his unkind nature toward her.

Yet, she’s also bombarded by too much caring about her diabetes, as her mother is fiercely protective of her, worried that she may be pushing herself too hard. When Harper unknowingly sets up her fate of bringing Mitchell and his friend on as student trainers for her volleyball team, she starts to have her work cut out for her. Mitchell pushes her hard, and when she responds well to his direction, she surprises not only herself, but him. He realizes that there may be more to Harper than meets the eye, and at the same time, Harper finds herself having trouble getting Mitchell out of her thoughts.

Besides learning about Harper’s home life, including her diabetes and her mother’s protective nature, we learn that Mitchell’s home life is not all sunshine and roses. He is dealing with troubles that no adult, let alone child, should have to conquer, especially when one is so young. His mother is sick and his step-father takes out his frustration on Mitchell. Readers learn that even though someone might seem strong on the outside, what’s inside matters, too. Mitchell is just a little boy inside, trying to protect his mother and save her from any more struggle or worry.

Kylie Key has done a nice job setting the stage for two characters who are determined to make their mark, but have troubles keeping them from shining as much as they’d like. The story is one of determination, strength, and learning to cope with troubles one may never have seen coming.

You can find ‘My High School Rebel Boyfriend’ by Kylie Key here.