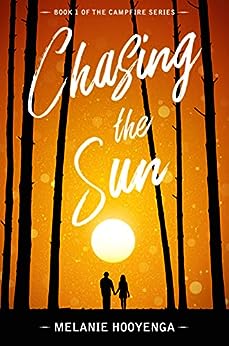 ‘Chasing the Sun’ by Melanie Hooyenga captures the raw emotions felt after a breakup, as well as the ones that can throw anyone for a loop as they enter into something new. When Sage and Pax break up, she doesn’t know if her heart and her mind will ever be in sync again. Having lost the ability to trust guys after getting out of an emotionally abusive relationship, she internally questions herself and the guys around her. When she meets Neb, even though it’s just over text, she feels something happening between them, but the fact that they haven’t met in person makes it easier for her to let loose and enjoy their conversations. Since he has just moved to town and doesn’t know her past, she is able to be herself with him without worrying that his judgment is clouded since he knows what she’s been through. When she finds she is going to meet him on a school trip to see the eclipse, she is excited, yet worry clouds how eager she is. It doesn’t help that Pax seems to show up wherever she is, causing her to succumb to the anger, tension, and guilt she feels after dealing with him for so long.

Along with her best friend, Naomi, Sage and their friends travel to see the eclipse. Once there, she meets Neb in person, and the way they click makes her thrilled, yet very wary all at the same time. She remembers how Pax swept her off her feet too, and how he seemed so nice at first. Her questioning nature could threaten to ruin their relationship as it just starts, but Neb takes it in stride, as he tries to show her that he is nothing like her ex. Moving on from Pax for both Sage and Neb is made all that much more difficult, though, when Pax’s sister, Ariana, and Ariana’s friend, Tara, also go on the trip. Sage can’t shake the feeling that she’s being watched, as though Pax sent them to spy on her, and Neb can’t get Tara to realize he’s not interested in her.

The way that Sage and Neb’s relationship develops is endearing. It shows that love can seemingly exist at first sight; however, it doesn’t hurt when you’ve been talking with someone via text for weeks prior to meeting them, and you know that person’s sense of humor and how you get along to at least some degree already.

Sage, Neb, and their friends throw around lots of fun “sun puns” and jokes about the eclipse. They show that even when people know things about you that aren’t so pleasant, it doesn’t mean that they can’t still enjoy your company and have your back when someone threatens to stand in your way or make your life harder.

‘Chasing the Sun’ isn’t just about a group of friends going to see the eclipse happen. It’s about chasing dreams, chasing truth, chasing love, and chasing self-worth. Melanie Hooyenga has done a wonderful job penning all of this emotion in her latest novel.

You can find ‘Chasing the Sun’ by Melanie Hooyenga here.